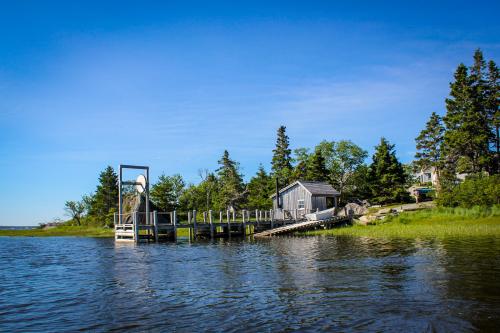 The initial cause of tidal action is the pull or attraction on the world's oceans by the moon, sun, planets and stars. They exert their gravitational influence most in relatively narrow bands around the earth at about 45 degrees north and south latitude. This is so because those are the areas tipped closest and farthest away from these celestial bodies. Although the gravitational pull on the earth by these bodies and particularly by the moon is strong, it is not enough to actually lift water but it can greatly influence its direction of flow, thus creating ocean tides. Along the Atlantic coast of Nova Scotia ocean tides account for a general rise and fall of from one to two meters. Sometimes this figure can be higher if there is a celestial alignment which would combine the gravitational influence of these bodies on the earth.

However, for this region, there are two other principal factors (geographical shape and tidal resonance) which change these two meter tides to the 5 meter range. This is why a 40 ft. lobster fishing boat is able to sail through this narrow channel at high tide and one can walk across it to the islands at low tide.

This is a crib style wharf, similar to the small wharves that once dotted the shores in the region. It measures 60 feet in length and 8 feet in width and is supported by 3 cribs measuring 10’ x 10’. The materials consist of natural white spruce and the cribs are filled with rocks.

Back in those days, fishermen had to plan their departure and return from fishing to coincide with the high tide in order to dock and unload their fish.

This winch, called a “vireveau” in Acadian French, is a mechanical device that works by winding and unwinding a rope or chain around a spool or drum that is large enough to reduce the physical effort. This device was used to lower supplies onto the boats or to raise heavy containers of fish onto the wharf 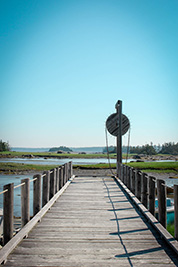 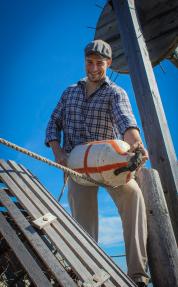 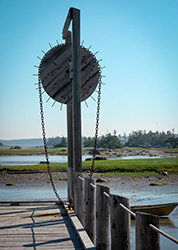